The Plight of the Honey Bee

The consequences of the poor autumn weather followed by a long winter are easily seen by the lack of grass in the fields and the seasons being a month behind. The deaths of livestock due to late snow and the fodder crisis have been all too visible in our national media, but the catastrophic loss of honey bees since February has gone largely unnoticed. Yes we’ve had coverage of Neonicotinoids, their effect on bees and the ensuing ban, but there has been very little mention of the weather related deaths of bees.
There are many reasons for the decline in honey bees and here we are talking about our native honey bee, Apis Melifera Melifera.

Our Bees
Last autumn I had 7 colonies of bees in excellent order and ready for winter.  The first warm day after 14th February I always take a quick look at each colony and give fondant, just in case stores are getting low. All 7 colonies were doing well with plenty of active bees and they were getting ready to increase numbers ready for the spring burst of blossom.

Over the next 2 months it was not possible to open the hives, but I have perspex crown boards on so I can see into the hives without opening them, allowing me to see if they have fondant and if there are bees present, but not much else. So I was able to see that 3 colonies had died off. I could see that there were bees in the other 4 but whenever I went to the apiary I knew that I wasn’t seeing enough bees flying around the hives.

I finally got to open the hives on the May bank holiday weekend, and inspect each colony properly but I really wasn’t prepared for what I found. 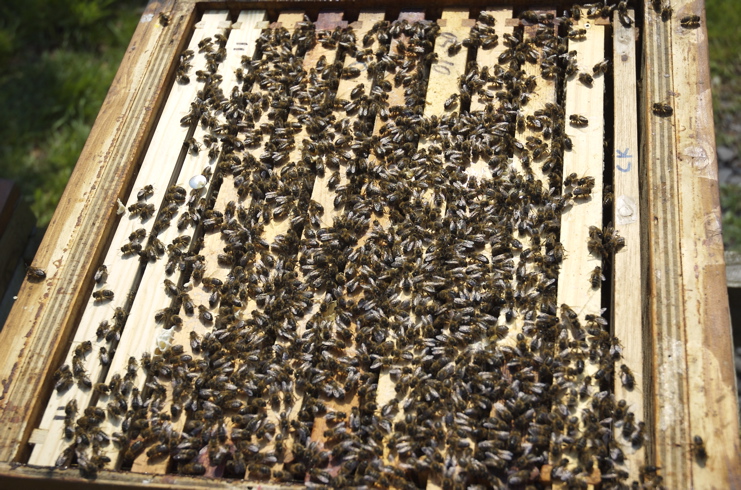 Of my seven colonies in Nov 2012, I still had seven by mid February and I was confident that they had made it through winter. But between Feb and now, I have lost three and of the four remaining colonies, one definitely will make it; one should make it and two are very doubtful. I am having to pour inverted sugar directly onto the frames next to the bees and brush it into the cells so that they don’t have to leave the brood nest to feed!

And I am not the only one. But  what has happened? The truth is that nobody really knows and much of the evidence is anecdotal, and therefore has not been scientifically proven. But if we wait for scientific proof, every honey bee in Ireland will be dead. As it is there are probably no wild honey bees left.

Varroa
Since about 2000 the varroa mite has been a huge issue in Ireland, and has changed beekeeping forever. But we now have this under control and can do so by using a relatively natural product, an extract of the thyme plant called thymol which cause the varroa mites to drop off the bees and frames, and when used in conjunction with open mesh floors, they fall through onto the ground, where they cannot survive.
There are various other diseases of bees including Nosema and American Foul Brood, all of which conspire to make beekeeping more difficult, and the life of wild honey bees (ones that aren’t managed) almost impossible. Some of these diseases come in as spores in imported honey.

Weather
Another contributing factor which cannot have escaped anyone’s notice is that we have not really had a proper summer for about the last ten years. We have indeed had periods of warm dry weather, but unless these coincide with a major source of nectar then it is of no significance to honey bees. Just because a plant is in flower does not mean that a bee can get nectar from it. Different flowers yield up their nectar at different temperatures; for clover it needs to be 20ºC and humid! When was the last time we had a day like that? 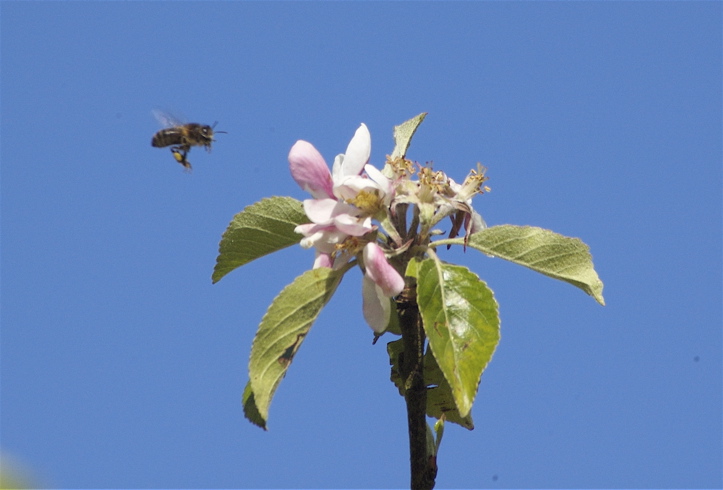 Perfect Storm
Combine a wet autumn, a long drawn out winter and an east wind driving the arrival of spring back by at least 4 weeks, and you have a real problem. Not only was it too cold for bees to forage, there was nothing to forage on. The flowering of the dandelion was delayed by a month as well. Dandelion is a hughly  important flower: it flowers early, yields nectar at low temperatures and has abundant pollen which is a bees only source of protein.

Worker bees have a short life span. In summer they live about 3 weeks and the ones born in November which have to carry the colony over the winter live about 4 months. Because the arrival of nectar and pollen was so late and because there wasn’t enough stored pollen in the hives, the winter workers started to die off before they were able to replace themselves adequately. So that now we have colonies without enough bees to harvest the bounty that will be available when the whitethorn, chestnut and sycamore come into flower. By the time they build up numbers adequately, we will be into July!

I should be doing swarm inspections every 10 days with the expectation of swarming from June Bank Holiday weekend and the hives full of bees and covering all ten frames. My colonies are so small  that there are only enough bees to cover 2 frames, there are no drones and consequently no chance of swarming. Bees can’t swarm without drones because without drones, which are male, there is nothing to mate with new queens. Drones are only produced in times of plenty; they can’t forage, can’t even feed themselves and are a drain on resources.

This is going to make replacing lost colonies very difficult and very late in the season and that’s if we have a good summer and autumn. If we get weather like last year than we are looking at an absolute disaster. 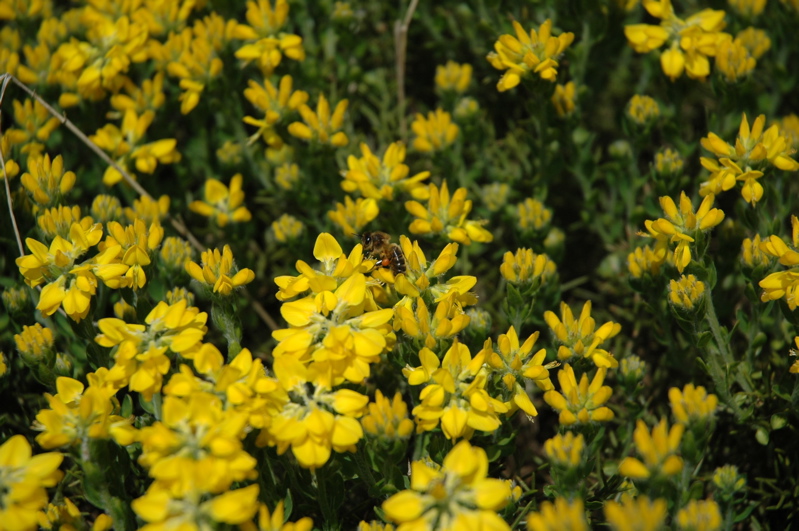 Oil Seed Rape
I don’t like oil seed rape honey, it’s very high in glucose, very sweet and sets like stone, so I don’t let my bees onto it. It’s not difficult, you just have to make sure there is none within 3 miles!

But it is a huge source of nectar so most beekeepers do. Not only is it a great resource for honey but it’s a great way of getting wax drawn on empty frames. You need to have time and experience, though, because everything happens very quickly. If you don’t extract honey quickly enough it sets in the frame, if you don’t keep a very close eye numbers build up very quickly and you’re into swarming, and if you don’t control that you lose your bees.

Quite apart from all that, there is the risk of insecticides. Having said that, it is only an issue when the crop is in flower, because if it’s not in flower, there won’t be any bees on it. In most instances farmers and beekeepers have an understanding and the farmer will contact the beekeeper the day before spraying and the bees can be closed in for the following day so that there are none on the crop when it is sprayed. If the bees don’t come into contact with the spray they won’t be killed.

The problem with Neonicotinoid seed treatments is that they are systemic, they are in the plant and if their intent is insecticidal, how is it possible that they don’t effect bees? 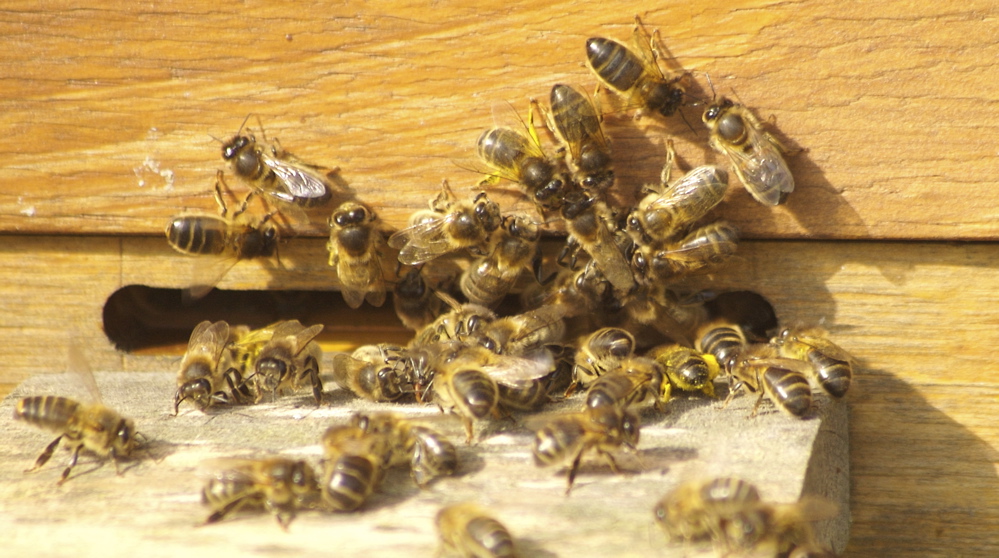 Experience
One member of our association is well known in beekeeping circles as being an authority on honey bees. He has kept them all his life, and it’s fair to say, bees and their welfare are an obsession. He hosts all our workshops and demonstrations, and never stops thinking and researching about how to improve beekeeping.
He does not lose bees….. ever, not even by accident! He takes it personally if even one bee is accidently squashed during a demonstration.
This year, he has lost more colonies than he has in total over the last ten years. If someone with this much experience and knowledge loses 60% of his bees, what hope is there for the rest of us!

And if the weather doesn’t improve this year……well, let’s not go there.

How can you help?
There is huge concern out there for the plight of our bees. My tweet about the theft of bees from a local keeper was read far and wide. We got calls from local and national newpapers as well as local and national radio!

Small things can help:
Plant a corner of your garden with plants bees like, such as borage, but particularly ones that flower early or late in the season.
Don’t mow your dandelions early in the season or at least until the chestnut flowers!
Don’t kill bees. If you have a swarm, call a local beekeeper.
Become a beekeeper!
Accept that anecdotal evidence may have to be sufficient, because if we wait for scientific proof, it may be too late. 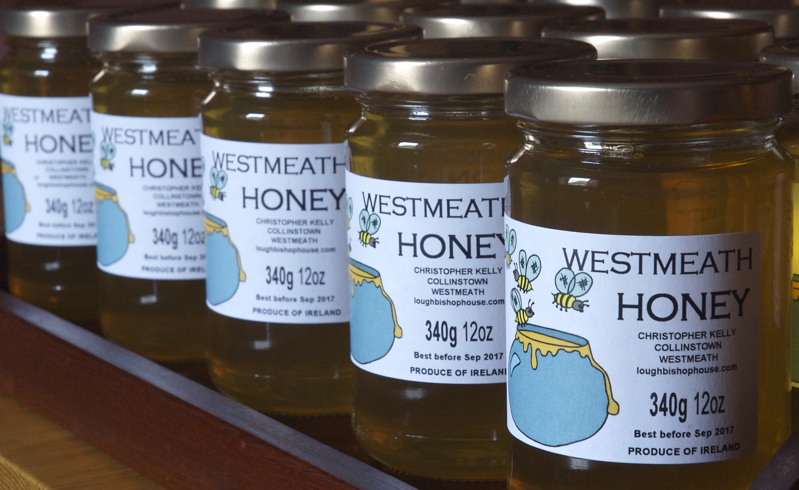 We will have no honey this year! 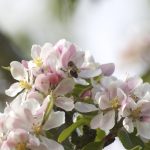 Photos from the OrchardOur Blog 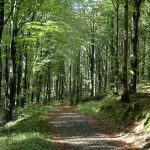 The Wonders of North WestmeathOur Blog